This week, I learned a very important lesson about how I view progress.

I was shocked when I realized my view might be completely counter-productive to my son’s success in our future world.

And, this deep wisdom was gleaned not through an expert lecture.

Our bedtime routine includes time during which my son plays with Legos while he waits for me to finish evening duties and join him in his room to read a bedtime story.

Legos have been an important part of his childhood and his development. His Lego creations line every surface area available. They are big (Millennium Falcon) and 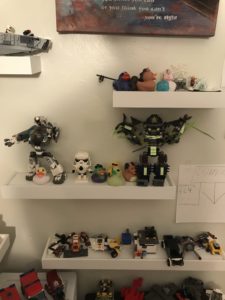 small (Mixels) and each represent an investment of time. They also represent a chapter of his development — both in dexterity and interest.

This particular evening, I entered his bedroom and found that he had dismantled one of his larger (and cooler, IMHO) Lego creations. A fairly large pirate ship with unique pieces, secret hatches, and detailed cabin. 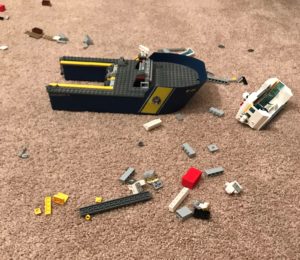 Just that morning, I had moved this pirate ship back into his room after having cleared a few inches of space to give it a spot. It had most recently spent time in the guest room, since the abundance of finished Lego sets in his room left no space for a creation this large.

Still reeling from the dismantlement of the Lego Police Station two years ago (I spent 2 hours independently reconstructing the three building intake, jail, and helicopter pad before its final demise later in the year), seeing the pirate ship in pieces sent me straight to reaction mode.

“Oh, no. You are not taking any more Lego creations apart.”

And, suddenly, I noticed the pride in his up-turned face faded to shame and sadness.

I took a breath and a new approach. Instead of unloading my feelings on him and holding him responsible, I went inward and processed my feelings aloud with him. I shared that we have three 12″x12″ tubs full of single Lego pieces and when I see him take something apart…I fear it ceases to exist and only adds to Legos that aren’t used.

He shared that he had an idea for how to make the ship cooler. And, what does it matter? He hadn’t touched it in years, so isn’t it better to actually play with it than it just sit around?

In those moments I realized that to prepare him for the world of work, where iteration, regeneration, and continuous improvement are everything…I have some work to do.

My life experience taught and reinforced that success comes through identifying a goal, following the instructions to get there, checking the box and moving on.

Yet, I’ve had occasion to recognize that in my professional world, I might be a little too attached to my investment in the work product. I have resisted when what had once been ‘done’ became outdated and it was time to refine it or completely recreate it.

I spent years in IT, and I’ll confess: I’d always grieve a bit when a new system would come along a couple of years after we’d rolled out a big project and replace/wipe-out/extinguish all the thousands of hours that had been invested in the previous version.

“How have I managed to survive in our world with this sort of mindset?” I thought.

“How can I nurture a different mindset in my son, because his world will only be 100x more demanding of iteration, creation, and innovation than the world in which I live?”

One of my favorite concepts is “Strong ideas, loosely held”. It encourages us to have a point of view, but be open to change and to evolution.

From now on, I commit to hold ‘Done’ a little more loosely.

And, rather than celebrate ‘done’…I will celebrate creation and change.

(Especially when it comes to Legos).