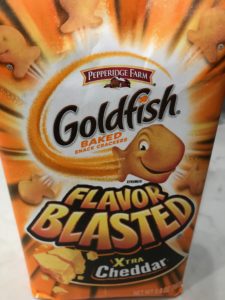 My son eats Goldfish crackers on the way to school.

(I checked the nutrition info, and a handful of Goldfish roughly equate to a quarter cup of Lucky Charms. So, I allow it.)

It is more habit than anything than a calorie-deficit necessity.

Last week, we were on our way out the door. Rushing and late, as usual.

“Mama, can you get the Goldfish?”

“No, buddy. I’m late. I’ll get them out of the cupboard, but you’ll need to pour them.”

His eyes got big as he realized that this responsibility also meant he was in charge of how many he poured.

I selected a small plastic container with a lid that locks.

He filled it to the rim.

At first, I found myself frustrated. That his greedy instinct had caused such waste. The ride to school isn’t long enough for anything more than a handful.

But, as we walked out the door, I realized this was such a happy accident.

That, by giving control, autonomy and responsibility to someone else…someone on the front line, we’d broken through a status quo pattern.

My child had just shown me the solution to the last minute scamper out the door, and the incessant demand to find time for ‘the pouring of the Goldfish’.

By overfilling, he’d done the task for the rest of the week. Now, the remaining goldfish would sit in the car, container top closed, until we were back for that ride tomorrow, and the next day, and the next. Until they were gone.

One of the most important leadership epiphanies is that innovation happens at the frontline, by the people who make the product or by the customers who use the product. A leader’s responsibility is to create two-way dialogue with employees and customers and to create environments where happy accidents (or poignant insights) can be harnessed into ground-breaking ideas that solve problems and find efficiencies. Fast.

You don’t need to invest in a fancy ‘system’ for innovation to make this happen.

Bringing opportunities for innovation to more areas of the business will not only cause you to move faster into new, untapped innovation, you’ll release the creative capacity of your organization.

And, you know what’s wild?

All that capacity. All those great ideas…

They simply need someone to ask them to ‘pour the Goldfish’.