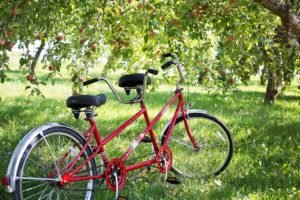 About 15 years ago, I was listening to the radio, and a small guest sound-bite between songs caught my attention. I recall nothing of the story itself, but I have spent countless hours thinking about the statement made at the end: “God always gets His way.”

It was powerful, reassuring, and obvious at the same time. Of course the creator of the universe gets his way. Yet what I found the most freedom in was the fact that I can mess up, make bad decisions, think I know what to do/but don’t, veer off God’s desired course…and He’ll still make sure that I’ll eventually get back to what he had in mind for me to start with.

At least, that is what I think it means.

And, there IS a tug. You’ve felt it. Sometimes it comes in a recognizable discontent with your present situation. It may also show up in a series of events you’ll be tempted to label coincidences. Sometimes it’s an inner voice that tells you things like ‘you were made for something else,’ ‘it’s time to move on’, ‘this isn’t all there is.’

It’s not a question of whether God will get his way, it’s to what degree you’ll let him. Tuning into that purpose He has for your life is like tuning an old-fashioned radio dial. The closer you get to the frequency, the clearer the sound becomes. Some of us might be content to listen to the songs with a slight bit of static in the background. Others will seek clarity in the signal and keep tuning until we get it right. There’s no question, it’s most enjoyable when we’re tuned in closely.

So often, we strive to be in charge. Yet we are arm wrestling with the Creator of the Universe.

Instead, why not surrender? What might wait behind the next corner if you step onto the moving train instead of trying to boss around the conductor.

You can start tuning in today simply by thinking about what you love. And, then do more of it.

We’ve been imprinted with a special code…not all of us love the same things. And, that’s the point. The more you trust your code, do what brings you joy, the more you’ll trust yourself to do more of it. When you’re on the right path, you will feel more energy, feel more present and alive, and it doesn’t require you quit your job and move to Costa Rica (at least not right away).

Small steps of trust will lead to larger steps later.

I remember reading the story below when I was in high school. You can substitute ‘Jesus’ with whichever spiritual force you recognize. (In my mind…God is God…and that’s the point here).

A Tandem Ride With God

I used to think of God as my observer, my judge, keeping track of the things I did wrong, so as to know whether I merited heaven or hell when I die. He was out there, sort of like a president. I recognized His picture when I saw it, but I didn’t really know Him.

But later on, when I met Jesus, it seemed as though life was rather like a bike, but it was a tandem bike, and I noticed that Jesus was in the back helping me pedal. I didn’t know just when it was He suggested we change, but life has not been the same since I took the back-seat to Jesus, my Lord. He makes life exciting. When I had control, I thought I knew the way. It was rather boring, but predictable. It was the shortest distance between two points.

But when He took the lead, He knew delightful long cuts, up mountains, and through rocky places and at break-through speeds; it was all I could do to hang on! Even though it often looked like madness, He said, “Pedal!” I was worried and anxious and asked, “Where are you taking me?” He laughed and didn’t answer and I started to learn to trust. I forgot my boring life and entered into adventure. And when I’d say, “I’m scared”, He’d lean back and touch my hand.

He took me to people with gifts that I needed, gifts of healing, acceptance and joy. They gave me their gifts to take on my journey, our journey, my Lord’s and mine. And we were off again. He said, “Give the gifts away; they’re extra baggage, too much weight.” So I did, to the people we met, and I found in giving I received, and still our burden was light.

I did not trust Him, at first, in control of my life. I thought He’d wreck it, but He knows bike secrets, knows how to make it bend to take sharp corners, jump to clear high rocks, fly to shorten scary passages. And I am learning to shut up and pedal in the strangest places, and I’m beginning to enjoy the view and the cool breeze on my face with my delightful constant companion, Jesus.

And when I’m sure I just can’t do any more, He just smiles and says… “Pedal.”