So often, the limits that are keeping us from being our best are completely within our control.

They exist in our mind.

If you’re saying any of these things, be careful. It’s a sign you might operating under false constraints that are holding you back. 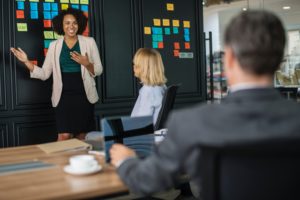 Whenever these thoughts creep into your mind or you hear them come out of your mouth, go back to the facts:

Sam shared that throughout his career, he would walk into Tom’s office with ideas. Lots of ideas. Most of the time, Tom would send him packing with questions he wasn’t able to answer or reasons the idea wouldn’t work. But, sometimes…sometimes, Tom really liked the idea and he’d implement it. Sam shared that he kept going back, because, statistically, he’d eventually land some ideas and make a massive difference at the company.

It took setting ego aside.

It took resilience and a desire to learn.

And, it resulted in impact.

No surprise that when Sam took the harder road, he realized massive gain as his career accelerated and he made an impact on the business.

Instead, say this: “I’m just the person who cares enough [to say this, take a risk, put it out there, ask the question, offer the idea]”.

Then, do it. (And, remember, the same phrase that guides you to make the right decision every time can serve as your compass in this situation too).

Take it one step further:

Don’t just take my word for it. For the next six months, keep a running list of the times you push through and take action rather than waiting to be comfortable or to be asked. At the end of six months, review the impact to your career, your reputation and credibility.

Photos by rawpixel on Unsplash