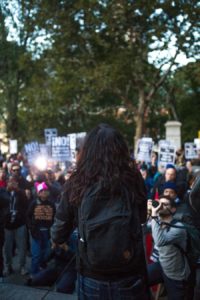 For the last few years, I’ve gotten very curious about how movements happen.

A ‘movement’ is defined as “a widespread change that a group of people working together to advance their shared political, social, or artistic ideas.”

Movements aren’t easy, but we’ve started to see more of them. The Women’s March on Washington, for one.

Unlike the orchestration of top-down change, movements are organic. The change might seem insurmountable at first, but is capable of rallying people to take a stand. They often take courage, are grass-roots, and are one of the most powerful examples of human connection.

People come together and give the best of themselves for something they believe is unjust…and they just won’t take it anymore.

On the week anniversary of the school shooting in Parkland, I’m inspired by the group of students who are insisting something this horrific will not happen again. A colleague’s daughter shared her experience and the #NeverAgain movement on Canadian television station, CBC.

It made me think…I call myself a change management practitioner.

How might change agents around the world bring our knowledge and skill to the movement forming in my own community?

A movement that will save lives one day?

Well, here’s a start. To Nikki and the group of courageous students who will right-size the Second Amendment, here’s what I know about making a movement happen.

In one of the most entertaining TED Talks to grace the TED stage:

Both Duhigg and Sivers share research that indicates movements take strong will and patience. Sometimes they don’t go as fast as we want them to, but it doesn’t mean they won’t happen.

Building to the tipping point has everything to do with perseverance and belief that we can no longer tolerate the status quo.

It takes knowing that events like those at Marjorie Stoneman Douglas are unacceptable. #NeverAgain.