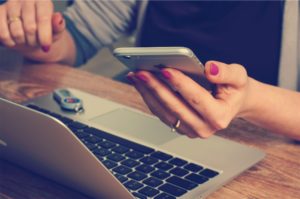 It’s an interesting time to be a female in the workplace.

On one hand, halle(freakin)lujah that people are finally being held accountable for disrespectful, demeaning behavior.

While this post is not about #MeToo, where #MeToo takes us in the next five years will be interesting. This insightful, powerful podcast with Adam Grant, Ashley Judd, Tarana Burke and Ronan Farrow will have you alternating between indignation, sorrow, and laughter about where our world is in this journey of power and respect.

Yes, there are major issues women face in general and in the workplace.

The one I’m going to speak about today seems almost trivial in comparison.

But, it’s rooted in our beliefs. And, it has the potential to tip the scales on the gender imbalance in the workplace.

If you’re a Gen-Xer like me, it’s what we are trying to reconcile in the disconnect between the path our mothers pioneered and where we are today. It was the generation of women before us who laid the groundwork for working outside the home to be not only acceptable…but necessary.

We saw them do it. And, we saw them struggle to resolve the gap between society’s expectation of home-making and their current working state. Or, maybe we saw them war with the emotions of it being economically necessary but not emotionally embraced. For some of us, we witnessed unadulterated liberation in their newly accepted and supported role in contributing to the family’s financial well-being and using their gifts and strengths to make an impact on a company, a medical field, the military or the law.

And, yet…a generation later, I’ve talked with many a working mom who is still trying to balance it all.

And, clearly, by the workforce statistics in America, we haven’t quite cracked the code. The Center for American Progress reports:

When a new role revealed became available at my company, the first questions that came to mind were not how this role would accelerate my career, open new growth opportunities and challenge me. Instead, I ruminated on these questions first:

I have a close friend and we’ve ‘grown-up’ professionally together. We met when she was a consultant at one of my previous employers. In those days, neither of us had kids yet she was getting married later that year.

Our paths crossed again 7 years later, and she joined the team I was managing, again as a consultant. This time with children. And, now, despite not working together and living thousands of miles away, we talk at least once a month.

When we do, it’s a speed round of coaching.

For 30 minutes we lay our challenges on the table and help each other navigate, with the context of the others’ strengths and development areas in mind. It’s a radically candid conversation every time, and…thanks to Beth…I’ve cultivated a stronger belief in myself and I’ve jumped into the deep-end on several opportunities long before I was comfortable. And, long before I could reconcile my own beliefs with her vision of my potential.

I talked with her as this role came up and shared my struggle to balance the mom-who-likes-my-job persona.

She offered this mantra and I’ve shared it with working-mom friends.

This is what we do.

She explained that when her two young girls share an observation that the nanny takes them to a lesson or a birthday party or that mommy has to miss dinner, Beth reinforces the fact that ‘this is what we do’. There’s no guilt in it. No culpability. It’s simply fact.

We’re creating our own life. There is no template, playbook or judges holding scorecards on the sideline.

This is the path we are on. And, this is what we do.

I realized, in those words, I was free to design the guilt-free life. To stop judging my performance as a mom. Instead, I realized I was offering my son an example of parenting that would be his context for this incredibly important role. I have no idea what the world will be like when he grows up, how he’ll feel about aftercare, or missing soccer practice for a meeting.

What I hope for him is that he lives free of the guilt.

And, that…somehow…I can show him that “keeping the plates spinning” requires some creativity and a lot of acceptance. It also requires realizing that the ideas we had of what a parent should do/prioritize/be might not line up with our reality once we get there.

And, I hope he has a friend like Beth. A friend who can bring wisdom for a lifetime, and be on the journey for the long-haul.

Thank you, Beth. We get each other through.

This is what we do.