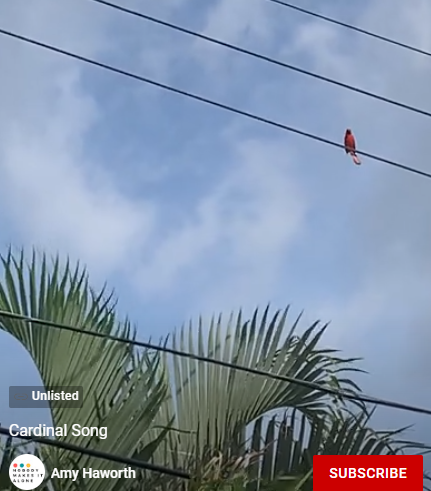 Beautiful in its red plumage, unaware.

We watched in shock as it moved from the magnolia tree and flew straight towards the window.

With certainty, it used its beak to peck the image in the glass.

This cardinal, so sure that its reflection was an enemy who had arrived to steal its territory, mustered its deepest strength, its surest assault, to send that invader-cardinal home...forever.

I wondered, did it muse at how the enemy cardinal pulled back and flew away at the same moment as its hero-assailant?

Did it consider how unexpected the enemy's texture was -- smooth glass rather than soft feathers?

Did it fly back to its roost in the wild trees proclaiming victory to its partner, suffering stories of bravery and challenge?

Did it once wonder if that other cardinal was real? Did it lie awake at night, exhausted at the enemy's persistent return...day-after-day?

To this bird, this partial truth had become its life.

It's instinct and inability to see the full picture was driving it to take action.

Watching, the truth came over me.

I am the cardinal.

Sure that my reality is truth, when it's only a mirage.

Spending my resources to worry, protect, and fear a false enemy.

(Did you realize that FEAR = false evidence appearing real).

In the moment that the cardinal chose to attack that enemy bird, there was another experience available.

At that same moment, that cardinal could have rested in that tree with knowledge that its eyes and fears were simply playing tricks.

With that knowledge, an alternate experience was available right then...if only it had the consciousness to tap into it.

"Your belief is your only real limit." (David Cameron Gikandi)

Don't be fooled, thinking "That's just a bird. I am human. I would know better."

At any moment, we are choosing our reality.

Know that there are infinite possibilities in every choice.

And, consider, if you deviate from being led by fear and instinct, what might you find?

The other lesson here, It never hurts to make friends with your reflection. You'll save a lot of pain. Because, you're beautiful. Created to be perfect in your originality and imperfections.

When you come alive to the lessons of the cardinal, my prayer is that you'll spend more time soaring than you spend fighting an enemy that exists only in your mind.