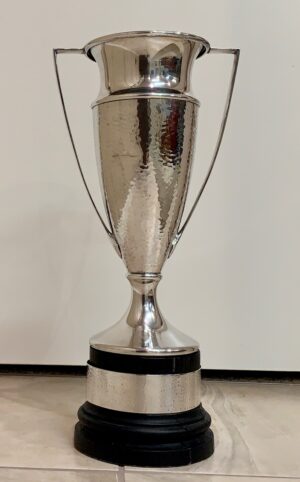 A few years ago, my dad's sister sent him a trophy their father had earned in 1929. It was deeply tarnished. The black layer had crept like lichen over every surface, so that it was a mere shadow of its former glory.

I only recently began to feel curious about how tarnish works. I learned that silver tarnishes when sulfur-containing gasses in the air cause a chemical reaction that creates a surface layer of tarnish.

You can tell how long tarnish has formed on silver by the color. Based on the thickness of the tarnish, it moves from yellow through red-brown to blue. Once an object appears black, the silver sulfide has become so thick that you're seeing its true color -- pure black.

The only way to preserve the item from the destructive tarnish is to keep it polished. To inhibit the intrusive growth of the tarnish and allow the object to consistently shine as it was intended.

Polishing is a process done with care.

Slowly, thoughtfully, the polisher takes a soft cloth and some special polish and gently rubs the darkness away. It's not done casually or fast. It's slow and deliberate. And done with a human touch.

When my dad received the trophy, he couldn't let it stay in its ruined state.

My dad is a bit of a legendary polisher. In fact, when I was a teenager, he once polished my Doc Martens, a brand of shoes for which I paid premium price to look old.

Yet, there's something about him that finds joy in uncovering the beauty of objects and people masked behind a curtain. Whether that curtain be self-doubt, negativity or a purposeful layer of patina.

Yet always with a deep appreciation.

For the uniqueness of his dad.

For the strength represented in that trophy.

For the reflection of pieces of his father that I hope he saw in himself once that trophy held its original gleam.

Who do you have in your life that will hold you gently and polish you until you shine?

And, who do you polish?

We are conservators of each other in this journey of life.

Each of us called to polish at least one other when the invisible forces that cause us to tarnish start to alter our intended beauty.

May your day and decisions be guided by the fact that we are all made to shine.