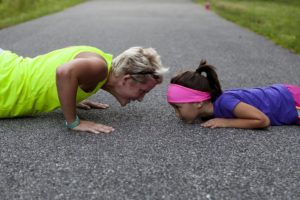 As a parent, I see these moments arrive and feel as inadequately prepared as I did the Easter Sunday when my son was two I didn’t realize the grocery store would be closed. I filled an Easter basket with the dredges of Easter candy options in the clearance aisle of Walgreens.

As he jumped out of the car to head to a couple weeks at summer camp where he didn’t know anyone…the anxiety was real.

He explained that he didn’t feel well and his stomach hurt.

At first, I thought, “stomach bug?” then I realized his commentary was describing the feeling of nervousness when we’re out of our comfort zone.

Yet, I knew he could do it.

And, I knew I had approximately four minutes to help him believe he could too.

While I honored his feelings of hesitation, I knew that what he was facing would ultimately teach him to believe in his ability and in himself…and be more equipped to take on the thousands of situations in his future when he’d need to take a leap into the uncomfortable.

I found that the advice I was giving him might actually be be helpful in our professional lives, as well.

I wasn’t sure he believed me, but I knew it was important he knew my view on his ability.

And, I recalled the moments where someone else’s belief in me was all I needed to act as if I believed it too.

A few weeks ago, a colleague facilitated a wonderful team-building exercise. We paired up and discussed experiences and stories from our career.

The first question was:

Today, I invite you to tell us about that experience in the comments. If you’re not ready to make it public here, write it down in a journal or an email to yourself.

Share the details, re-live the emotions and the outcomes.

Then, be outspoken about your authentic belief in someone who might need to see themselves or a situation through your eyes.